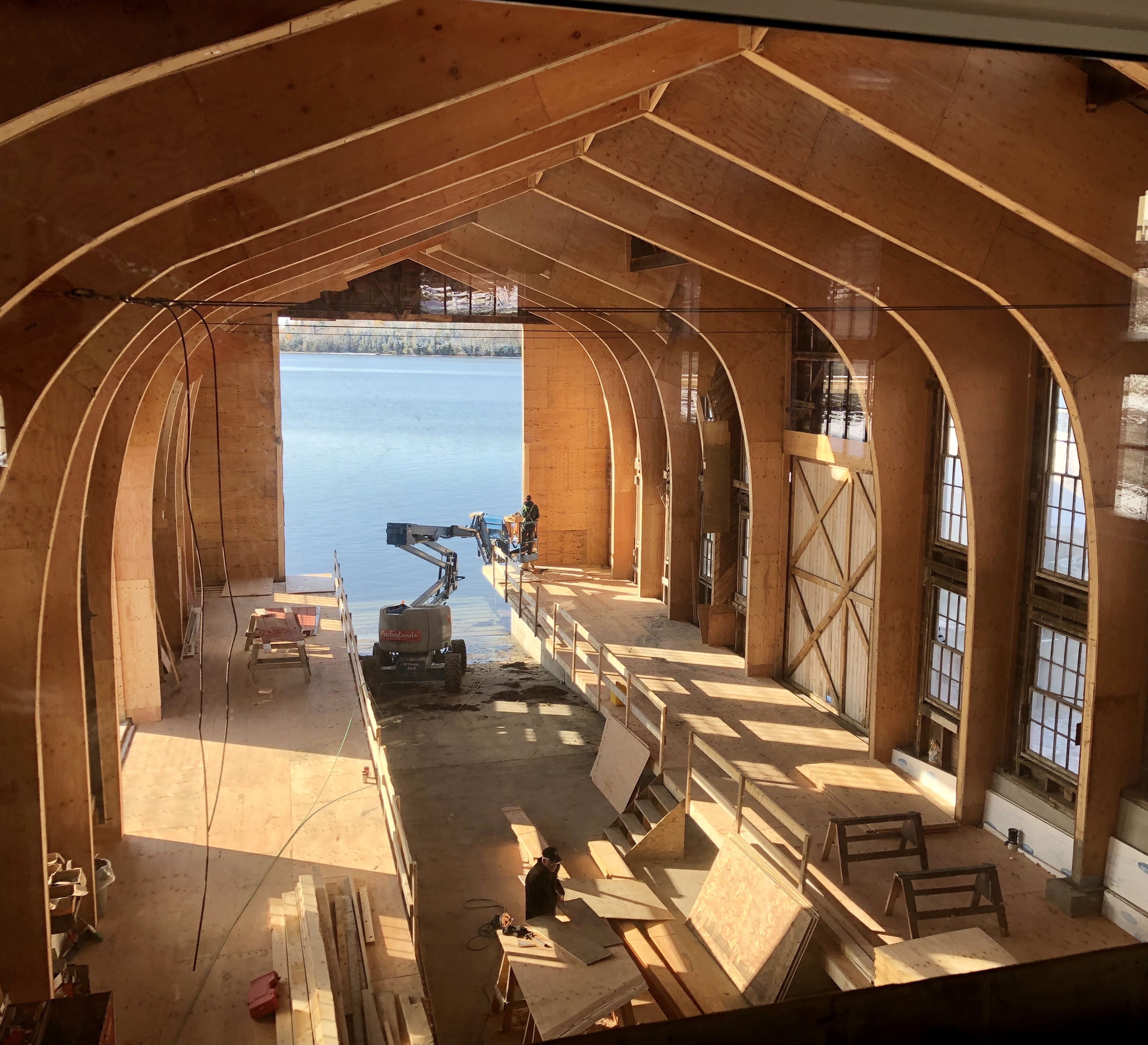 The Big Boat Shed is a big deal and, recently, there was some big news! Our team has  been working away on the revitalization of this historic boatbuilding facility on Lunenburg’s working waterfront. All part of the waterfront master plan co-created with community.

And now thanks to our many partners Province of Nova Scotia, Tourism Nova Scotia, Atlantic Canada Opportunities Agency, Fisheries Museum of the Atlantic (FMA), and The Lunenburg Marine Museum Society—everyone can have a front-row seat to this piece of living history. The second-floor space of the Big Boat Shed will host additional exhibits and be part of the Museum’s programming this summer and into the future. All in time for some of the Bluenose 100 celebrations.

Fun fact! It was the main boat building facility for the famous Smith & Rhuland Shipyards where historic boats like Bluenose II, Bounty and Rose were built. 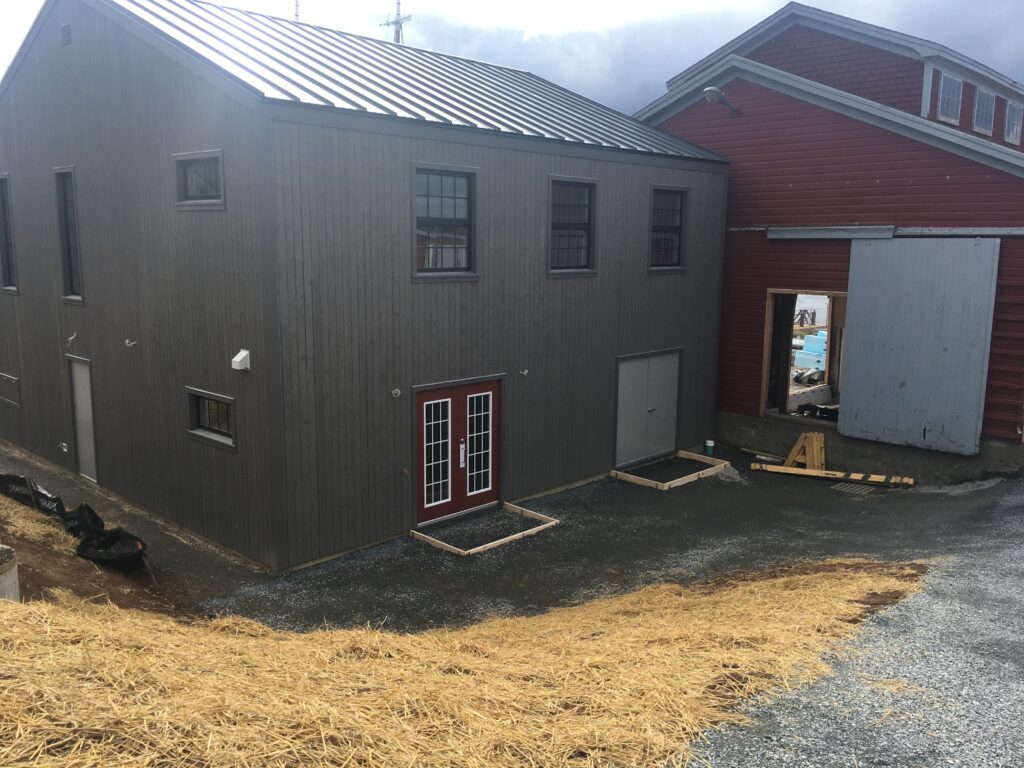 Part of the project — the new addition to the original Big Boat Shed building — will accommodate a hands-on small boat building facility and interpretation centre, programming and new exhibits under the operation of FMA.The space and additional exhibits will be open for the summer of 2021 and forward, hosting traditional boat builders while allowing the public to experience a piece of Nova Scotia’s boat building history through new viewing areas, exhibits and interactive workshops.

“The Big Boat Shed offers us another outstanding tool for telling the story of our province’s fishing and boat building heritage,” said Angela Saunders, the general manager for the FMA.

“Given Lunenburg’s designation as a UNESCO World Heritage Site and a working waterfront, we are proud to be able to give visitors a front row seat to living history. Not many places are able to offer that hands on experience. When paired with the Bluenose 100 celebrations this year, there’s much to look forward to in 2021.”

The project was announced in 2019 and included the restoration and expansion of the Big Boat Shed, the main boat building facility for the famous Smith & Rhuland Shipyards. More than 270 ships ​— ​including Bluenose II, the Bounty and the Rose ​— ​were constructed at the site over its history.

Develop Nova Scotia led and oversaw the project as part of its work with the community to revitalize the waterfront. The Big Boat Shed is identified as a key project in the working waterfront master plan and dovetails with the town’s strategic planning.

LMMS President John Meisner noted the Big Boat Shed is another opportunity for the Society, which operates both the Fisheries Museum of the Atlantic and Bluenose II on behalf of the province, to preserve and showcase a key piece of Lunenburg’s history.

“This project has been quite the undertaking and I am incredibly thankful for the dedicated work of our board members, museum staff and our strategic partners,” he said.

As previously announced, funding for the Big Boat Shed project was made possible with support from the Government of Canada through ACOA, and the Province of Nova Scotia including Tourism Nova Scotia’s Tourism Revitalization of Icons Program. The $1.5 million in funding supported work to stabilize the building structure, re-construct the floor and install a full-length slipway.

“For centuries Lunenburg’s rich seafaring heritage has drawn tourists from around the world. The new interpretation centre at the Big Boat Shed will give visitors one more reason to visit and remember Nova Scotia’s iconic South Shore. Investments like this in Atlantic Canada’s tourism sector will help ensure that the industry will emerge from this pandemic even stronger and more prosperous,” said the Honourable Bernadette Jordan, Minister of Fisheries, Oceans and the Canadian Coast, and Member of Parliament for South Shore – St. Margarets, on behalf of the Honourable Mélanie Joly, Minister of Economic Development and Official Languages.

“The Big Boat Shed is an iconic piece of the Lunenburg waterfront and a symbol of the town’s rich shipbuilding heritage. This work, and our partnership, builds on the community’s vision for their working waterfront and has been supported by the tireless work of community-led organizations like the Lunenburg Waterfront Association,” said Jennifer Angel, President and CEO of Develop Nova Scotia.

“The success of projects like the Big Boat Shed are measured, not by what we build, but how we build it, so we’ll know we’ve got it right when local community members love the place that we’ve built together and feel it contributes to the authenticity of Lunenburg.”

The Honourable Suzanne Lohnes-Croft, MLA for Lunenburg and Minister of Communities, Culture and Heritage, also shared her excitement at the project’s completion.

“Our province is proud to have invested $1 million in Lunenburg’s iconic working waterfront. The revitalization and enhancement of the Big Boat Shed will help further highlight our shipbuilding heritage, generate new business around the site and enhance the overall experience for visitors. I look forward to attending many events in the facility,” she said.

For her part, Saunders said she and museum staff look forward to welcoming visitors from across Nova Scotia to the facility.

“This is a good news story at a time when people need a little good news,” she said.

The FMA is part of the Nova Scotia Museum, Department of Communities, Culture and Heritage.