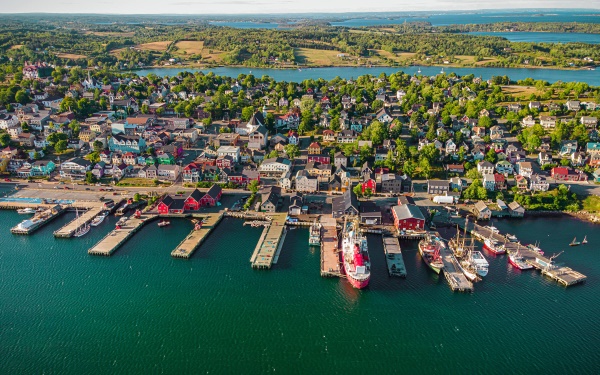 Thanks to everyone who joined the virtual 17th Annual Lunenburg Waterfront Association Symposium on June 24/21.
With community and project updates from the Lunenburg Waterfront Association Inc. and Develop Nova Scotia, attendees also heard from guest speaker Inbal Newman – Picton Castle alumni and the Winter 2021 Artist-in-Residence at the Lunenburg School of the Arts.It’s been an exciting time on Lunenburg’s working waterfront with a number of projects completed or nearing completion as part of the co-created Waterfront Master Plan. These include Ocean Gear Seawall, Smith + Rhuland Shipyard and Wharf C, Zwicker & Co. Property, and the Big Boat Shed and Addition.

The Big Boat Shed project — a recipient of the Town of Lunenburg’s Heritage Recognition Award – received  extensive renovation work that will enable the Big Boat Shed to carry on as a major boat building and repair facility for many years to come, helping to reinstate and fulfill its original function. The new addition will give visitors an inside look at current boatbuilding projects as well as programming and more.

Have an inside look at the revitalized Big Boat Shed and new interpretive centre addition which will be programmed by the Fisheries Museum of the Atlantic (anticipated opening is mid-July 2021).

During this year’s Symposium, ACOA also announced a non-repayable contribution of $600,000 to Develop Nova Scotia for renovations to the Zwicker & Co. Warehouse.The Province of Nova Scotia also contributed $1.2 million toward this project.

This contribution supports the renovation of the Zwicker & Co. Warehouse into a multi-functional space that will operate year-round. The upgrades will attract new businesses, increase visitor foot traffic, and contribute to the overall tourism offering in Lunenburg.

Also announced is that Fisheries and Oceans Canada will begin advance planning for the reconstruction of the Lunenburg Railway Wharf. This investment is part of the Government of Canada’s commitment to renewing its network of small craft harbours, which are vital parts of communities and local economies from coast to coast to coast. Read more on these here.