(Read about the recent award presented to Waterfront Development and partners for Msit No’Kmaq: All My Relations, from Sail Training International, below).

RDV 2017 attracted an estimated 94,000 visitors from outside Nova Scotia. Total attendance at the various events was estimated to be 663,000 with some people taking in multiple events.

“Tall Ships festivals like Rendez-Vous 2017 are a chance for us to celebrate our connection to the ocean, showcase our diverse province, and give us an opportunity to provide sail training opportunities for youth,” said Jennifer Angel, acting president and CEO of Waterfront Development. “We are proud of the visitation, proud of the economic impact and ultimately proud of the way our community came together to organize another successful tall ships event.”

Between June 30 and Aug. 16, tall ships visited 10 ports around the province. They were Pugwash, Pictou, Port Hawkesbury, St. Peter’s, Sydney, Louisbourg, Halifax, Lunenburg, Shelburne, Digby and, for the first time, a Sail Past of Annapolis Royal.

The economic and visitation study was done by the Canadian Sport Tourism Alliance. The study, available online here, found $30 million in visitor and community spending. The study also found that the event:

— created 216 jobs and generated about $9 million in wages

— attracted 38,698 first-time visitors to Nova Scotia, of which 41 per cent came specifically for the RDV 2017

“The Government of Nova Scotia was pleased to invest in this global event,” said Leo Glavine, Minister of Communities, Culture and Heritage. “Not only was RDV 2017 a resounding success in terms of showcasing our province’s culture, heritage and communities, we now have valuable data that reinforces the importance of major events as economic engines. This success continues to demonstrate to Sail Training International why Nova Scotia is perfectly situated to host major ocean related events.” 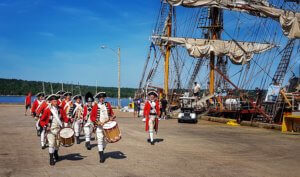 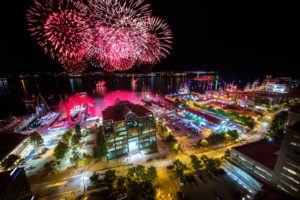 RDV 2017 was a 7,000 nautical mile international race led by Sail Training International. As part of the transatlantic event, and in recognition of Canada 150, the local event comprised about one third of Canadian ports visited.

“The Rendez-Vous 2017 Tall Ships Regatta was the first Canada 150 Signature Project announced back in June 2015, and I am thrilled that it has achieved such success,” said Mélanie Joly, Minister of Canadian Heritage. ”We can all be proud to have participated in activities that highlight the values and goals of Canada 150, and bring our communities and our country closer together. That is what Canada 150 is all about.”

Nova Scotia’s Tall Ships event was recently recognized with the first Sail Training International Mission Award, given at the discretion of the Board of Trustees to any group or individual who achieves or supports an exceptional achievement in support of the mission of sail training.

Sail Training International (STI) chairman Doug Prothero presented the award to Waterfront Development for their work with project partners on Msit No’Kmaq: All My Relations. This youth development and skills-building initiative focused on Indigenous Canadians during RDV 2017.

The project provided the opportunity for 45 Indigenous young people, between the ages of 16 and 24 from across Canada, on the final race leg from Halifax to France on board tall ship Gulden Leeuw.

“Sometimes you have to tell one story in order to tell another. When we planted the seed of the idea we could not have imagined how far Waterfront Development would take its commitment to the project,” said Mr. Prothero.

“In our desire to keep pushing on the limits of our mission work – of taking some of this world’s most underprivileged on a sail training voyage – and in the spirit of truth and reconciliation, this voyage has been a success.”