Etoile (“star”) is a French naval schooner used as a training vessel. She is visiting the Halifax waterfront (Tall Ships Quay; near Emera) from June 9 to June 12.

She was launched on 8 February 1932. She is a replica of a type of fishing vessel which was used until 1935 off Iceland. She has a sister ship, the Belle Poule. Both the Étoile and the Belle Poule joined the Free French Forces during the Second World War, a deed for which they are still honoured by flying the French flag with the cross of Lorraine. 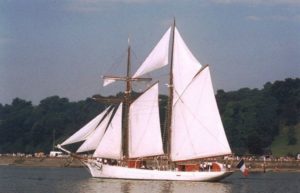 Come help welcome Schooner Katie Belle and her crew as she returns to Nova Scotia from her maiden voyage.

She will sail into the Halifax Harbour on Saturday, June 11 at 1pm and will dock beside the Maritime Museum of the Atlantic. As part of our Visiting Ship Program, she will be open to the public for free deck tours between 2 pm and 4 pm, after a brief welcome by some special guests.

Let’s show Evan and Nick Densmore, Captain, First Mate and shipwrights, how proud we are to say Katie Belle is part of our Nova Scotian history. She is expected to be in port until June 15. Follow our Facebook and Twitter accounts for additional open deck times.